Big Game This Weekend For The Denver Tebows... I Mean Broncos

One of the biggest things I found fascinating after moving to Denver is the media attention toward Broncos quarterback and Florida's golden boy Tim Tebow. If you thought the frenzy on ESPN was crazy enough, try living in the city. Billboards, local magazine covers, individual "Tebow Time" segments on all the local news stations.

It's unbelievable, but it's good for the city. The fans here definitely seem rejuvenated and ready for a playoff run.

(Sidebar: Isn't it ironic how I've cheered for the Lions my whole life, and after I move out of Michigan, they now look like they can do some serious damage in the playoffs? Was I the bad luck??)

Anyways — for people who don't track playoff standings on ESPN every day, the Broncos are in the hunt for a playoff spot under Tebow's late-game heroics. If they beat the Kansas City Chiefs this weekend at home (the city will be crazy busy), or if the Oakland Raiders lose (we also kind of cheer for the Raiders in this household because of Hillsdale monster Jared Veldheer), the Broncos make the playoffs.

It'll be an awesome way to kick off 2012 if the Broncos make the playoffs. To pay tribute to our city's quarterback, we took a couple (or several) 'Tebowing" photos on our honeymoon! 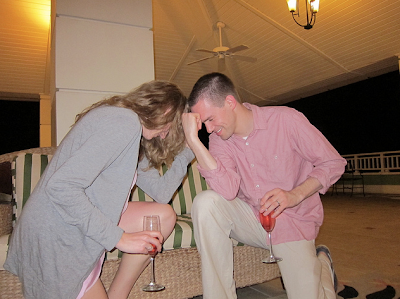 And make sure to watch this amazing video of Tebow's biggest fan, ESPN Analyst Skip Bayless.

Posted by Erin and Andrew Dodson at 10:56 AM