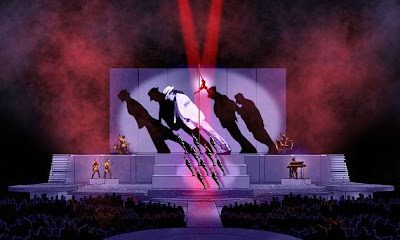 This past week, Erin began hyping up a big surprise she planned for us on Friday night. Being a good husband, I only checked the Denver Nuggets schedule to see if the Nugs were in town that night. They weren't, so I stopped looking at events around the Denver area. This was also a good idea, as it was a very long week at work, and knowing, or even having an inkling, of what we were doing would have made it that much longer.

After an awesome dinner at the Wazee Supper Club (great pizza), Erin and her family, who were also in the know about the surprise, walked over to the Pepsi Center (where the Nuggets play). After walking in, I see no signs, no programs — no clue whatsoever to what we were seeing. Once we found our seats, Erin broke the news to me: Cirque du Soleil: Michael Jackson the Immortal World Tour!

I was ECSTATIC! What an awesome surprise. I love Michael Jackson's music and of course his dancing. The show goes through the music career of MJ, starting with the Jackson 5, and then all of his big hits. There were also some deep tracks included. My favorite performance was a tossup between Human Nature and Billy Jean. In both performances, the dancers (acrobats?) wore outfits that had mini LED lights outlined around their entire body. Once all of the lights went out, all you saw were these outlines of people in multicolor LED light. For Billy Jean, you could clearly see MJ's original choreography. For Human Nature, the lights weren't outlines of the body, but more scattered around the entire body and very artistic. I can't describe how awesome it was, so when the tour comes to your hometown, go see it!

Watch the trailer for the show:

After cooking some pretty amazing meals this week, and then the MJ extravaganza — Erin is certainly in the running for wife of the year! Here are some more photos from the show: 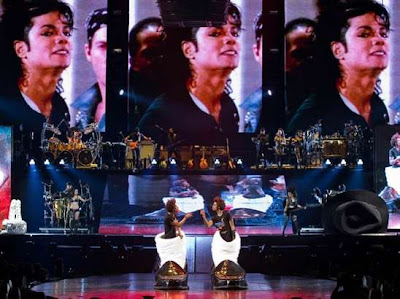 Posted by Erin and Andrew Dodson at 11:40 AM