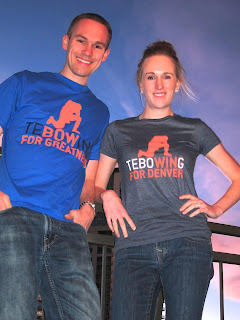 I'm not sure if you've heard, but there's a new Bronco in town, and he has a pretty good resume.

This week the Denver Broncos signed future hall-of-fame quarterback Peyton Manning to a 5 year deal worth $96 million. That means, based on his 2010 stats, that he will make about $42,000 for every completed pass he throws. Not bad.

And with Manning coming in, the city's love affair with the Tim Tebow has turned a corner. Being from Michigan, I'm a big Detroit Lions fan, but I was certainly entertained this season by Tebow's late-game heroics. His underdog, gritty style of play certainly electrified a city that's been waiting to win a championship.

Erin and I were certainly electrified. In fact, we ordered our "Tebowing" T-shirts that arrived just in time for the playoff game against the Patriots -- a game that the Broncos were embarrassed in.

So, cheers to you Tim Tebow. Critics have fair complaints that you struggle to throw the ball at an NFL caliber, but you certainly played with your heart all season, won a playoff game, and gave some hope to the city of Denver. Best of luck in the future!

Posted by Erin and Andrew Dodson at 9:15 AM