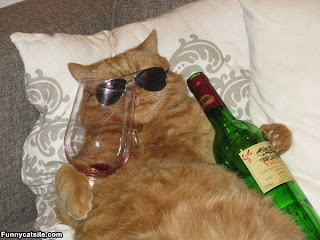 "Tonight we're going out and acting like normal 20-somethings and partying out late."

That was Erin and I Friday night. After a great dinner as part of Denver's restaurant week with the parent-in-laws, we returned to our condo, slammed a beer and walked over to Erin's coworker's apartment which is only a couple blocks from our place.

This was our night to party. Unfortunately, we were — and still are — terribly out of practice.

Some pre-bar shots ensued before hopping into the taxi and heading to Lower Downtown Denver where all the 20-somethings hang out on a Friday night. The bar scene was surprisingly quiet. No matter, though.

"We'll do a round of shots," Erin's coworker orders.

"Ah yes," I'm thinking to myself. "Being married doesn't slow us down. Look at us — probably the only married couple at the bar — and we're doing shots like champs!"

We decide to ditch the first bar. Of course, the typical 20-something is thinking that this current bar is not even packed. The average 20-something needs a bar filled with sweaty people, cheap beer and preferably no cover. (We had cash, though. We were ready.)

We switch it up (thank God) and get beers. Oh, but don't worry — more shots are on their way. That (Yäger?) shot was the final shot.

"I was confused Saturday morning, because I forgot that I was hungover," Erin said. "I laid still and felt nothing. I was fine. Then I moved."

Her face made that painful, cringing look.

It was that kind of a morning day. It lasted all day. We felt terrible and sick all day.

We survived and officially decided to go on an alcohol-free cleanse for the week that only consists of healthy food and water. We feel much better.

So, the moral of the story? We're still trying to figure that out. We don't regret going out because we haven't been able to go out with friends and enjoy a late Friday night. But I know that we have limits. Honestly, as much as we made fun of ourselves Friday night before going out (Erin in a mocking tone: "Oh, I'm Andrew, I just want to go to the bar and have one craft brew"), we have decided that a couple beers or glasses of wine is just fine for a Friday night. We probably would have had one more fun. Lesson learned.

I guess we're not the typical 20-somethings, but I'm ok with that.

(We were going to take a self-timer of ourselves Saturday night, but it hurt too much to find the camera. Next time.)

Posted by Erin and Andrew Dodson at 7:00 AM