The art of the stay-cation 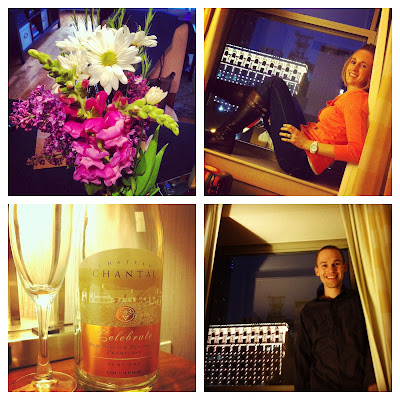 Why waste time in a plane, train or automobile? Sometimes the best vacation is in your backyard.

Last Friday Erin and I celebrated the end of her accounting busy season with our very own stay-cation! Here's the story:

On Cinco de Mayo, Erin and I went over to Golden, Colo. (home of Coors brewery!) to enjoy some refreshments at our friend Derek's brewery — Golden City Brewery — which is actually the second largest brewery in the town! The original plan was to have a beer or two and head back to the city early that night and find some Cinco de Mayo adventures in Denver.

Well, that didn't quite work out thanks to Derek's generosity and constant-giving of tasty brews. We ended up eating dinner in downtown Golden and ended up staying for a street party which was a ton of fun. It reminded me of being back in the smaller towns in Michigan, like Bay City and Frankenmuth, where everyone knows each other. Everyone was really friendly.

They had a raffle at the party that we all entered and to make a long story short, I heard my name called! I ended up winning a night in the downtown Denver Courtyard Marriott hotel and dinner for two at Rialto, a great little restaurant located inside the hotel. Needless to say, it made for the perfect stay-cation!

After work last Friday, we packed our bag and went on down to the hotel, popped some celebratory bubbly, then headed to dinner.

That week Erin also purchased a great Travel Zoo deal for discounted deserts and cocktails at this chic little desert bar in Denver called Crave. We met the (very flamboyant) owner and had a wonderful time! They had the old Willy Wonka moving playing off a projector screen, which was a bit creepy, but the deserts were excellent!

After checking out, we didn't let our vacation end. We enjoyed an afternoon movie date to see the Avengers which motivated us to become super heroes.

That evening, Erin, her sister and a couple of co-workers braved the cold rainy weather to see the Fray play outside at Redrocks — one of Colorado's best concert venues. I was able to stay inside, nice and toasty warm, and watch the NBA playoffs.

So, need plans for this weekend? Try a stay-cation! You won't regret it.
Posted by Erin and Andrew Dodson at 7:57 AM